Governor Schwarzenegger will host an immigration reform forum to support the historic opportunity to pass a bi-partisan immirgraion reform bill in the U.S. Congress this year.  The event will take place at the Schwarzenegger Institute at the University of Southern California on April 30th.

The Governor is hosting this forum to support the bi-partisan immigration reform effort currently underway in the U.S. Senate.  This is in keeping with the Institute's mission of advancing post-partisanship and finding real-world solutions to policy challenges.

Governor Schwarzenegger will open the forum by providing his perspective on the issue as an immigrant and the former Governor of California.

Following on from the Governor, Senator John McCain (R-AZ) and Senator Michael Bennet (D-CO), co-authors of the bi-partisan immigration reform bill, will take part in a moderated conversation on “the legislative path to comprehensive immigration reform”.

The forum will continue with a moderated conversation on “the importance of immigration reform to the U.S. economy and jobs”.  Former Commerce Secretary and Chairman of Republicans for Immigration Reform, Carlos Gutierrez, has confirmed his attendance.  USC Professor Dowell Myers has also agreed to speak on this panel.  He is the author of “Immigrants and Boomers” and is widely recognized as one of the country’s foremost experts on immigration.

The former president of Mexico, Vicente Fox, will close the forum by offering his unique and global perspective on immigration reform.

watch the event via live webcast at Priceschool.usc.edu 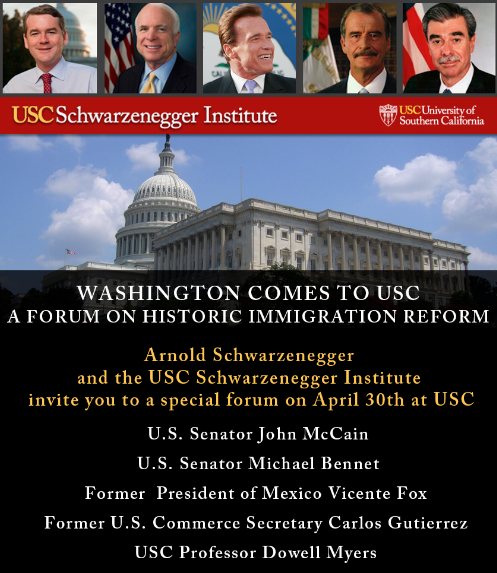