At Afterschool Summit, Schwarzenegger Criticizes balancing budget 'on the backs of kids'

Former California Gov. Arnold Schwarzenegger rallied after-school program leaders and educators from all 50 states, imploring them to join him in educating Congress, and being “terminators” – as he phrased it – in the battle to prevent $1.2 billion in federal funding cuts for these vital programs, which would impact more than 1.6 million children. 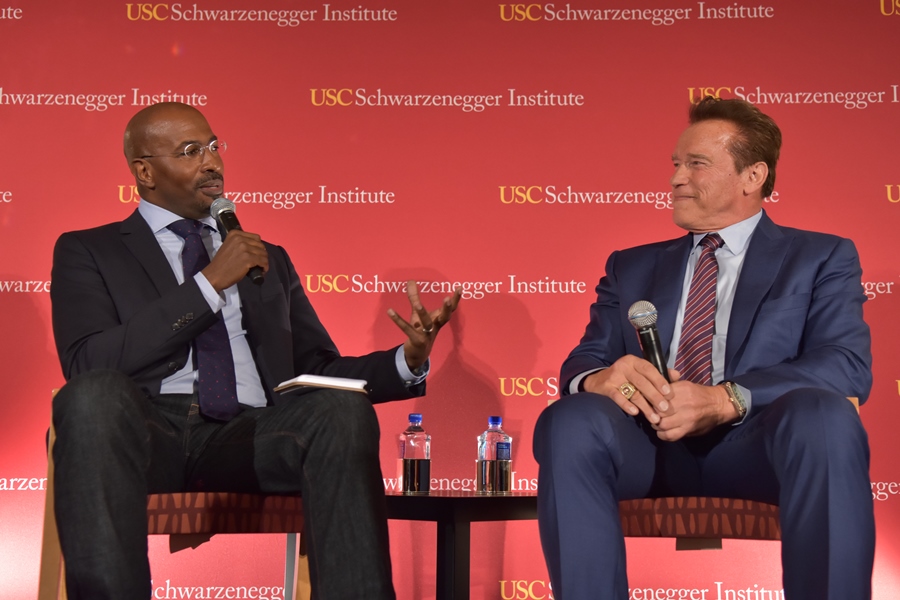 “This is not a party issue, this is a people’s issue,” Schwarzenegger said.

Prominent leaders from K-12 and higher education, government, media, military, sports, business and innovation gathered at the 2017 National After-School Summit, hosted by the USC Schwarzenegger Institute at the Price School of Public Policy, to put the spotlight on a simple truth — that after-school programs work. The event was held at USC’s Town and Gown ballroom on April 5, in partnership with Afterschool Alliance and After-School All-Stars, with support from the Charles Stewart Mott Foundation Schwarzenegger explained that law enforcement considers the hours from 3 to 6 p.m. a danger zone for kids. That’s when they get involved in activities that could be detrimental to their future, such as drugs, alcohol, gangs and violence. This, he said citing past research, is why every dollar spent on after-school programs saves $3-to-$6 in public services down the road.

“Since we know all of that, ask yourself the question, why does the President of the United States cut after-school programs?” Schwarzenegger said. “That’s not how you make America great, taking $1.2 billion away from the children and robbing them blind. Why would he want to balance the budget on the backs of those kids?” 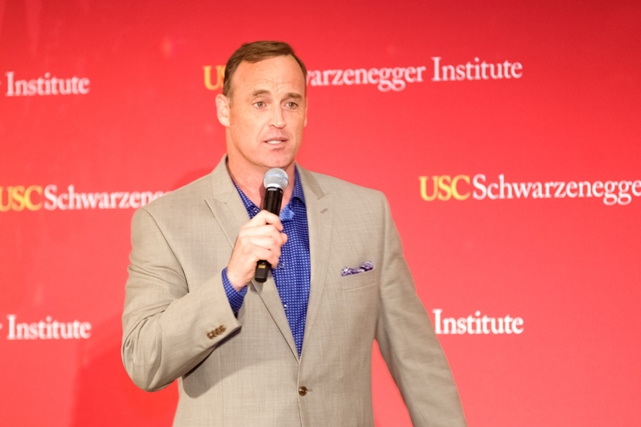 Emceed by American Ninja Warrior host Matt Iseman, the event got off to an entertaining start as children from Bell Gardens Intermediate showed off dance moves learned in their after-school program.

Bonnie Reiss, global director of the USC Schwarzenegger Institute who previously served as California’s Secretary of Education, noted that Schwarzenegger insists on starting these summits off with a performance as a visual reminder of why they are fighting for after-school programs.

“Nothing is more evident than seeing this remarkable, diverse young group of students that benefit by after-school programs,” Reiss said. “Supporting these kids is what makes America great.” 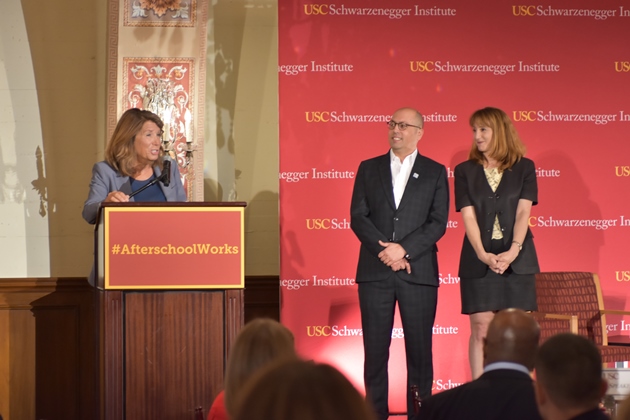 Schwarzenegger has long been passionate about after-school programs, using his prominence from acting and body building to found one of the nation’s largest programs, After-School All-Stars, in 1992. Additionally, he spent $2.3 million of his own money to help get voter approval for the After School Education and Safety Act in 2002, providing $550 million so that every elementary and middle school student in California could have access to an after-school program.

“To see the obstacles [kids] overcome, their lack of opportunity growing up, that really inspires me to act… to do something about it,” said Schwarzenegger during his conversation with CNN host Van Jones at the summit. 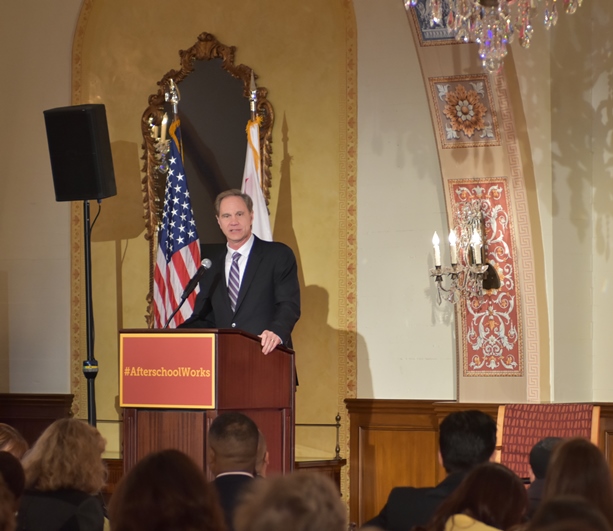 Three times since 2003, Schwarzenegger has taken to Washington, D.C., to successfully lobby Congress for the preservation of after-school funding. USC Price Dean Jack H. Knott joined him in 2013.

“I know firsthand how passionate Arnold is about this issue,” Knott said. “One of the great things about that experience was we could see that political leaders on both sides really believe in this issue. They care about standing with the millions of children and the families in these great after-school programs. I do believe that Arnold’s efforts in this regard, his work with Congress, have helped forge that kind of bipartisan support for these programs.”

A star-studded first panel looked at how sports help kids succeed in school, life and the workforce. 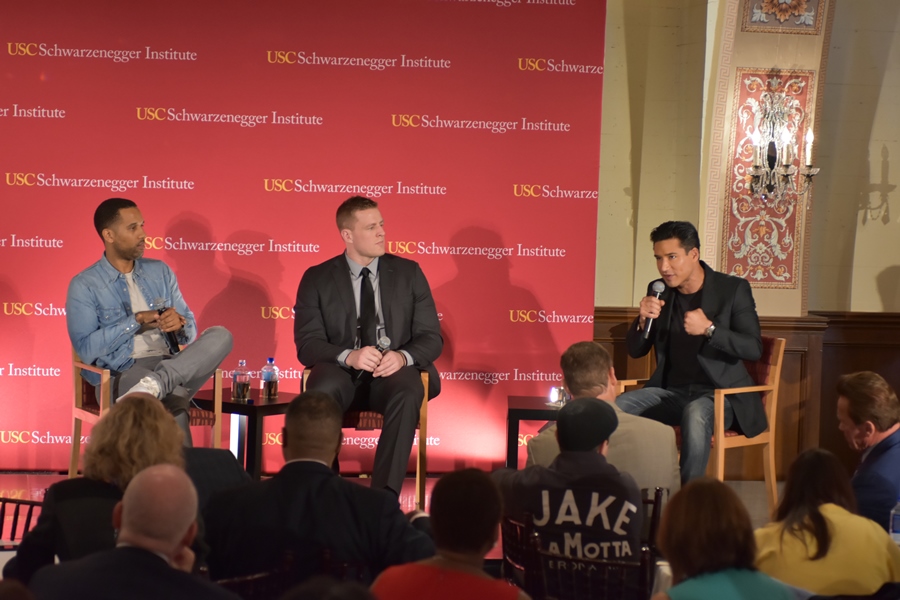 The panel was moderated by actor and TV host Mario Lopez, who explained that he grew up in Chula Vista, California, to immigrant parents and took part in after-school programs at the Boys and Girls Club, which exposed him to wrestling, dance and theater, setting the stage for his career. “I’m living proof of what these programs can do,” he said.

NFL star J.J. Watt discussed his foundation, which focuses on after-school programs and operates in 25 states. “The biggest benefit is what it can do beyond sports,” said Watt. “What it does in essence is teaches you about teamwork, discipline, work ethic, how to show up on time, how to work hard, be part of a team. It creates a support system around you that is your safety net.”

Maverick Carter, Lebron James’ business partner in founding LRMR Marketing and a board member on After-School All-Stars, said while he was growing up his mother worked until 5 p.m. each day and his father was incarcerated, but he was lucky to have sports to keep him out of trouble.

“For kids who grew up just like me but don’t play on a sports team, they can come to after-school programs and get the same type of attention I got,” Carter said.

A second panel, moderated by Bonnie Reiss, focused on the role of after-school programs to keep kids in school and on track. 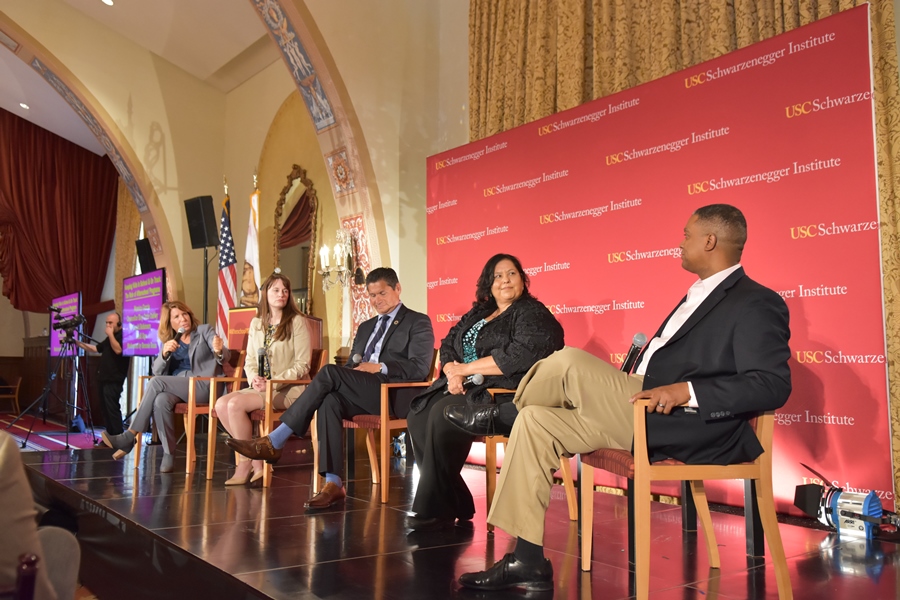 “It is a strategy for academic-wellness, a strategy for social-emotional learning, and we know it works,” Garcia said. “It’s good for L.A., good for California and good for the USA.”

“Higher education doesn’t begin the first day of college, it begins first day of life,” Oakley said. “To us, after-school programs build a social network in our communities that help students with all the skills they’ll need to be successful in college — not just the academic preparation, but the life preparation.”

Heidi Sipe, superintendent for the Umatilla School District in Oregon, stressed that after-school programs are not negotiable.

“It’s the one time of a kid’s day where he or she can be guaranteed to be in a safe environment, receiving some sort of food to fuel the fire and learn without barrier,” said Sipe, who was named Oregon’s Superintendent of the Year in 2016. “We cannot look at after-school as a negotiable. It is an essential element to childhood. We have to work to preserve the magic for kids because they deserve it, they need it and it is essential for their growth.”

The third panel focused on preparing students for the workforce and instilling an entrepreneurial spirit. Moderator Jodi Grant, executive director of the Afterschool Alliance, noted a recent poll showed that 83 percent of voters across every demographic oppose cuts to after-school programs. 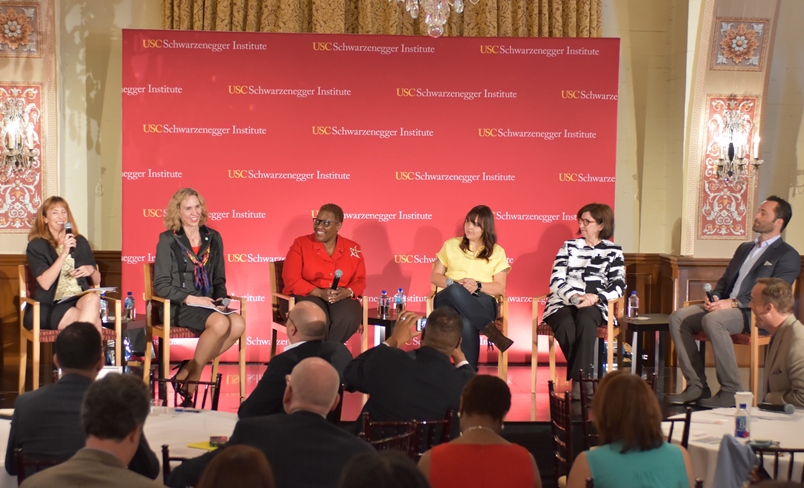 An important element of after-school programs is getting kids interested in and familiar with the jobs of the future. Michael Beckerman of the Internet Association attested that there is a shortfall of 250,000 U.S.-based students graduating with the skills needed to work for Internet and high-technology companies. Working with After-School All-Stars, the Internet Association has helped bring kids to visit such companies as Twitter, Facebook, Google and Amazon.

“When you see these middle-school kids walk around our companies, talk to engineers and learn how they got there, they get to see a path forward,” Beckerman said. “We want to have a diverse and educated workforce that we’re able to get domestically. We want to instill that, and part of it is starting in middle school and being involved in after-school programs, because those three hours after school have a huge impact on their lives, and we want to be part of that.”

Jody Breckenridge, vice admiral of the U.S. Coast Guard, stated that 71 percent of youth ages 17 to 25 cannot qualify for the military because of obesity, failing to complete high school or having a criminal record.

“Our after-school programs go to the very root causes that create those barriers,” Breckenridge said. “If we don’t make the investment, we already are experiencing difficulty recruiting for the military. But this goes far beyond our military. It’s really the future of our nation, and it’s a national security imperative.”

Mayors Karen Freeman-Wilson of Gary, Indiana, and Jennifer Roberts of Charlotte, North Carolina, spoke of the importance of after-school programs in their communities.

“Every mind is amazing,” said Roberts, who has also worked as a high school math teacher. “The after-school programs unlock those minds, and we need every child to have access to that amazing spark of inspiration.”

U.S. Senator Lisa Murkowski (R-AK), co-chair of the Senate Afterschool Caucus, provided a video message offering encouragement to the after-school practitioners and urging them to contact their federal representatives and share their stories.

“No president’s budget request is enacted without significant input by Congress,” Murkowski said. “While we must take the president’s proposal to eliminate funding for after-school programs seriously, this is not a time for panic. It’s a time to re-energize. It’s time to apply the theme of your conference – ready to work – to yourselves in the months ahead.”

Schwarzenegger asserted that the ultimate goal is not just to restore federal funding, but to get more funding so that the 20 million children left out of after-school programs have the opportunity to participate.

“We’re going to get there,” he said. “We will never stop until we get there.”